GOSSIPONTHIS.COM LOL “Price Is Right” Contestant Snatches Her Own Wig on National TV 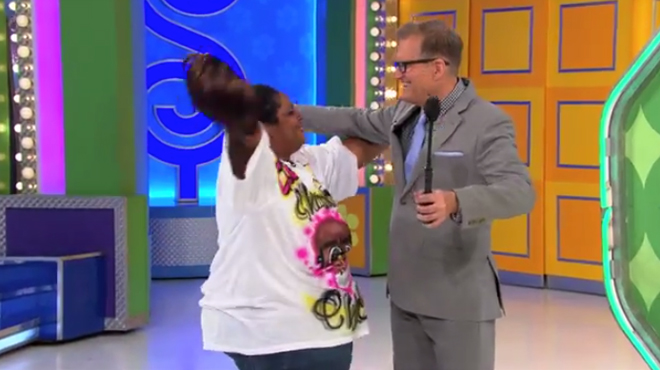 While some people dress to impress when they’re set to appear in front of a big audience, Sacramento resident Aliaya eschewed the fancy and elaborate approach and kept it real in the streets when she went on the “Price Is Right”.

Wearing a t-shirt with an airbrushed design that gave a shout out to “Chocolate Chicks,” a $10 synthetic Chinese wig and Kmart maternity jeans from 4 seasons ago, Aliaya clearly did not give a damn about the fashionista set.

What she lacks in fashion sense though she more than makes up for in enthusiasm.

Aliaya was so excited to be called down as a contestant that she even went and snatched her own wig. Unfortunately, what she revealed underneath looked like something that would be a cast member of “The Walking Dead”. This woman’s edges have been nuked and her hair looks like it hasn’t been moisturized since the dinosaurs went extinct.

If you’re gonna go around snatching your own wig and you know your hair looks like that, at least have the decency to throw a wig cap on it so we don’t have to witness this follicle fiasco.

The good news is, she won quite a bit as a contestant on the show, so hopefully some of those funds go toward a better wig and a decent wig cap.

WATCH ALIAYA SNATCH HER WIG ON THE PRICE IS RIGHT ABOVE