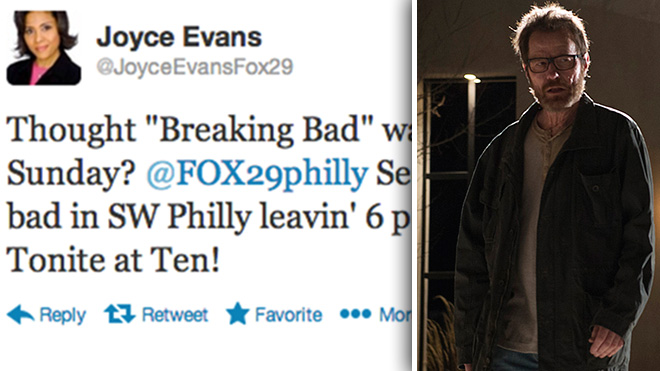 We all miss “Breaking Bad.” Jessie’s marvelously expressive face, Walter’s “I don’t give a f*ck” attitude, and all of the “oh shit” moments that unfolded. But last night, it became clear that some folks are going to appalling lengths to keep the AMC hit alive since it concluded last month.

For instance, Joyce Evans of Philadelphia’s WTXF-TV decided that it would be a good idea to use the much talked-about series finale to promote a segment on a shootout in Philadelphia.

The tweet, which went up on Sunday, has naturally generated major criticism. First, the reporter was reprimanded by her followers on the social media site and eventually, major news outlets began discussing it.

Evans defended herself, claiming that she only meant to draw parallels between the violence depicted on-screen that audiences typically devour, and the harsh realities of everyday crime.

“Last tweet NOT AST [sic] ALL A JOKE,” she posted. “Very real life drama was the point as oppose to one that end on tv. That was my point.”

Last tweet NOT AST ALL A JOKE. Very real life drama was the point as oppose to one that end on tv. That was my point

As the Hollywood Reporter notes, the shooting is still a developing story. According to the site, the brutal incident resulted in five people wounded and one dead. The shooter is still a reportedly at large.