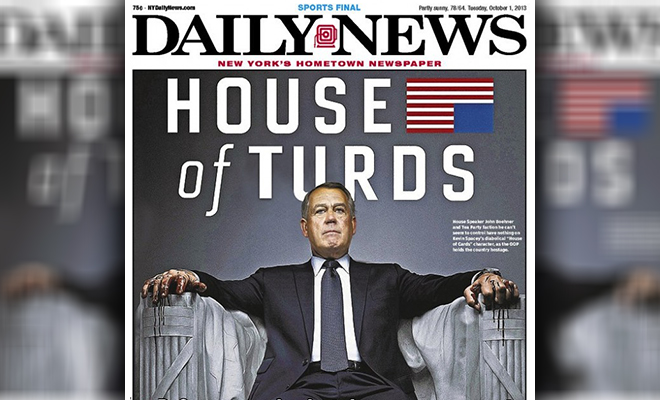 The New York Daily News should win all the awards for yesterday’s cover highlighting the government shutdown, which has now entered into its SECOND day.

The daily newspaper shamelessly makes fun of Speaker of the House John Boehner and the Republican majority in the House for the widely scrutinized government shutdown by showing Boehner sitting at the Lincoln Memorial under the headline “House of Turds” (an obvious nod to “House of Cards”) with actual crap dripping from his hands. If you didn’t catch the joke yet, they’re calling the Republicans in the House “TURDS.” House Of TURDS. Get it? LOLz for everybody.

Believe it or not, this isn’t the first time the Daily News has lambasted a House Speaker for a government shutdown. During the infamous 1995 shutdown (when Bill Clinton was in office), NYDN called out “CRY BABY” Newt Gingrinch and the Republicans with this cover: