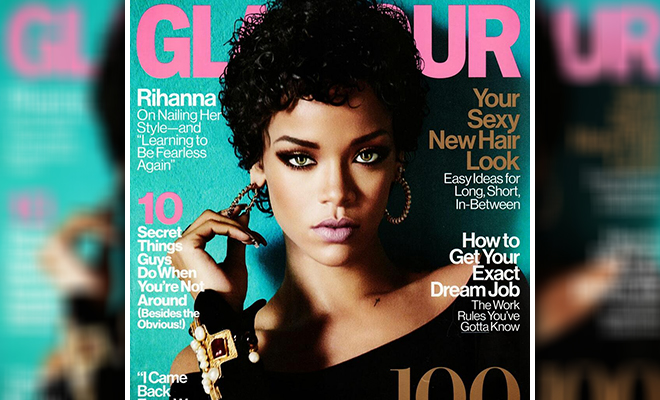 First thing’s first: Rihanna sort of looks like the daughter of Stoney Jackson and Gizmo on the cover of the November 2013 issue of Glamour magazine.

That’s not complete shade though. That girl is one of the prettiest things to have ever lived. That said, she is giving jheri curl juice teases. Hey, it beats a raggedy blond weave, though. In any event, Princess Rih-Rih paid a visit to BBC Studios in London to talk to Alan Carr about misrepresentation, her non-existent sex life, and her short but very much prolific music career.

I can’t believe the goddess isn’t getting laid every night. Who wants to volunteer their services? Just kidding, stop being perverts.

Here are some excerpts from the interview (via Necole Bitchie):

Is she unhappy about the way people perceive her?

It doesn’t piss me off because they don’t know me so well, so it’s easy for them to draw conclusions and its their right to. How can they know anything different? But I tried to be as honest with myself as possible. Be realistic with who I am and what I love to do and what makes me happy. And it’s not always partying, as a matter of fact, recently I’ve become like a square. I hate partying. I’ve been so bored with it. Maybe it’s because its the same music every night. I don’t know, y’all feel me? I don’t know, maybe we need some more DJ’s or something.

On churning out seven albums in seven years:

You work hard and you play hard. I’ve definitely been working a lot in the last 8 years, its been a lot of hard work, but I love it. I love doing what I do. I have a lot to celebrate, so you will catch me celebrating every once in a while because I work hard. I love what I do and I put my focus into that. That’s my priority.

On her sex life:

I am such a bootleg rockstar. I do nothing. I’m embarrassed to say that actually. That’s so disgusting. Its pathetic. I’m a bit of a square. Don’t feel bad for me, I’m good.

WATCH THE INTERVIEW & HER “WHAT NOW” PERFORMANCE HERE: