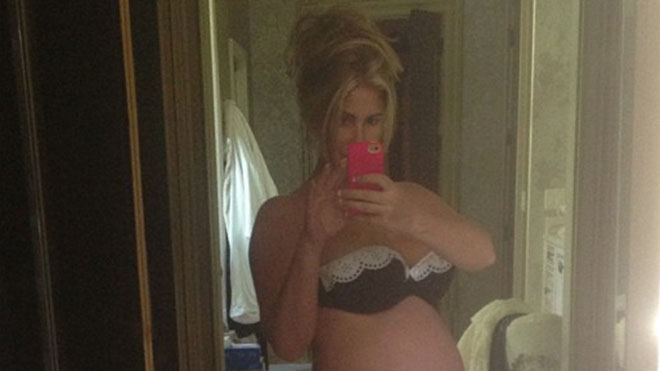 Former “Real Housewives of Atlanta” star Kim Zolciak is pregnant with twins and she posted a new selfie on Instagram Saturday, proudly showing off her growing baby bump in a teeny tiny black & white bikini.

Kim, who is pregnant for the FIFTH time captioned the photo: “Going swimming with the kiddos! The pool makes me feel so much lighter! This belly #twins #excited #blessed #nofilter.”

Zolciak — who you’ll remember made a dramatic departure on last season’s “RHOA” — and her husband, Atlanta Falcons football player Kroy Bierman are already parents to four children together: sons Kroy Jr. (2) and Kash (1) and daughters 16-year-old Brielle and 12-year-old Ariana, whom Zolciak had from a previous relationship and Biermann adopted.

In Touch Weekly reported on Zolciak’s fifth pregnancy (which came literally within 9 months of her fourth, SMDH!) a few months back, and the 35-year-old confirmed with E! News last month that she was having twins, though she did not reveal the sexes of her babies.

“I’m having twins and I couldn’t be more excited. I was completely shocked. I had no idea. It was a natural conception, but twins do run in the family, so I guess I shouldn’t have been surprised,” she said. “I can’t believe I am going to be a mom to six children. It’s going to be very busy but it’s a dream come true.”

With six kids already though, let’s hope Big Poppa’s former sidepiece is DUNZO with having babies so she can finally let that over-worked uterus of hers get some damn rest!