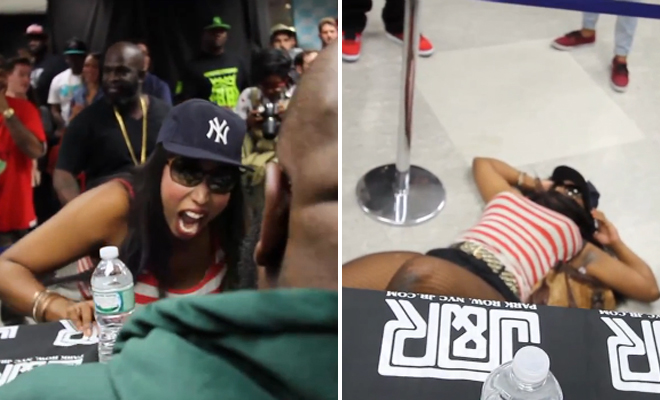 Meeting your idol can be an adrenaline rush like no other. But is B-cup Rick Ross really worth screaming and passing out over?

For one woman at a Maybach Music autograph signing: Hell to the yeah.

Wearing foundation that was about 3 shades lighter than her skin color and rocking a New York Yankees hat, cowboy boots, sunglasses and fishnet stockings, Rick Ross’ #1 fan looked like she got her makeup done by Lil’ Kim and her wardrobe assembled by Foxy Brown.

As she walked up to meet Rick, she immediately began squealing and before you know it, the oxygen to her brain cut off and ol’ girl dropped to the floor like her wig was on fire.

Everyone stood around filmed the passed out Rick Ross groupie with their iPhones and just waited to see if she would wake up. Nobody called an ambulance or a nurse. Nothing. Don’t you love people?

Thankfully, homegirl did get up and she went right back to stanning for Rick Ross and his jiggly man boobs.

You can kinda see it for Justin Bieber and his obsessed fans. After all, he’s young, handsome and he’s got ripped abs that he’s not afraid to flash for squeals of delight.

But wildin’ out for Rick Ross don’t make a lick of sense. Though to be fair, Rick Ross is fond of flashing his Buddha belly too, but those draw screams of terror rather than admiration.