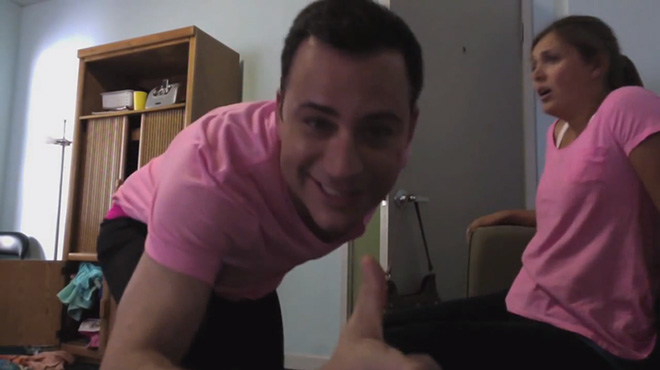 Many suspected that a video of a girl catching on fire while twerking — which has been dubbed the “Worst Twerk Fail EVER” — was fake, and as it turns out, it was!

The video showed a girl purportedly named Caitlin Heller twerking upside down on her “apartment door,” only to catch on fire after she came crashing down on top of a glass table with lit candles when her “roommate” walked in on her.

Jimmy Kimmel revealed on his show the other night that it was all an elaborate prank, and he was the one behind it. Turns out, the twerking girl’s name isn’t even “Caitlin Heller,” but Daphne Avalon and she works as a Hollywood stuntwoman.

If you pay attention, the original clip cuts off right after the girl’s pants catch on fire. But in a full “unedited” version Kimmel showed on TV, the late-night host barges in with a fire extinguisher and puts the flames out.

Kimmel explained that he and his team uploaded the video on YouTube months ago, using a fake account and everything, and instead of promoting it, they just “let the magic happen.”

And it did. To date, the video has received over 10 million views (and counting!) and the “Jimmy Kimmel Live” video production team put together a hilarious supercut of anchors from just about every major U.S. news show in awe over what they thought was the real deal.

“Some people even blamed Miley Cyrus as if this was her fault,” Kimmel joked.

Kimmel also said that after the clip went viral, their fake YouTube account received a ton of interview requests from different media outlets.