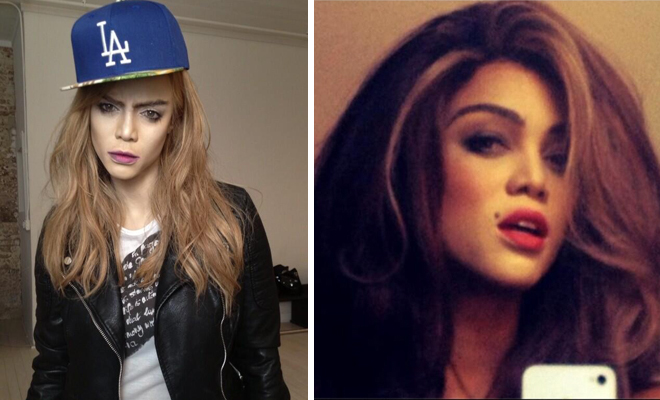 Tyra Banks is a strange piece of fruit. I know, it’s kind of like saying Oprah Winfrey is a boss-ass b*tch. Duh.

But still, even Tyra manages to surprise us with the depths of her weirdness every now again. And this new project of hers, 15, in which she tributes white supermodels in whiteface is definitely a 25 on the weirdometer.

In a series of photos released on Twitter, Tyra showed off shots of her transformed into Cindy Crawford, Kate Moss and Cara Delevigne, which were all part of the project with photographer Udo Spreitzenbarth. Spreitzenbarth’s site has an official press release outlining their collaboration:

Take a good look at some of the iconic models Tyra re-created.

It was amazing to be physically transformed into my idol, @CindyCrawford… #Fierce mole, hair & all! #NYFW #Tyra15 pic.twitter.com/ZnCb9WulHY

Hid my booty & boobies like a pro, for a pro – all to look & pose just like #SuperModel Kate Moss! #NYFW #Tyra15 pic.twitter.com/aCP6xxEMvz

People on the Internet are busy debating about whether Tyra dressing up as white women is reverse racism, but eff that. I’m more offended by the hideousness of her pancaked make-up. This photoshoot looks like: “What if Michael Jackson did drag?”

Well, Michael already kind of did drag in real life, but you know what I mean.

Instead of these accomplished ladies, Tyra really needs to be paying homage to Marlon and Shawn Wayans for blazing the trail with their movie White Chicks. Cause that’s who she really looks like in these pictures.