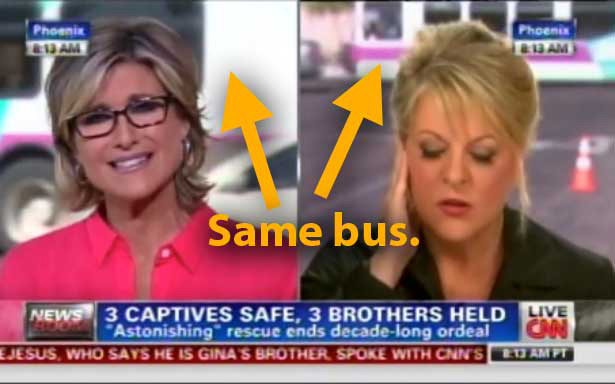 Well this is pretty funny. On Tuesday morning, CNN’s Ashley Banfield and HLN’s Nancy Grace did a “remote” split-screen interview to discuss the Cleveland kidnappings (since they’re both currently in Phoenix, AZ covering the Jodi Arias trial), which is pretty normal stuff for news anchors to do, right? Of course! Only, both Banfield and Grace are not just in the same city … but they’re IN THE SAME DAMN PARKING LOT!

If you look closely at the GIF at the top of this page, you will immediately notice the same red car driving pass both Banfield and Grace.

Check out another damning GIF here:

Did you see the man walking by, and the Nissan Xterra driving by, in both shots? And not only are the two news anchors in the exact same parking lot facing the exact same direction, but according to The Atlantic Wire (who first pointed this SMH-worthy mess out), they can’t be anymore than 30 feet away from each other.

It seems that Grace and Banfield are sitting in the same parking lot, facing in the same direction, and judging by the speed of the vehicles in their shots, they cannot be sitting more than 30 feet away from each other. Yet, they’re behaving as if the are on opposite sides of the world.

Granted, Grace and Banfield are on two separate networks (that share the same parent company, never-the-less) … but still, the fact that they were pretending to be in two different parts of the world when they’re really just a few brisk steps away from each other makes this whole thing HILARIOUS.