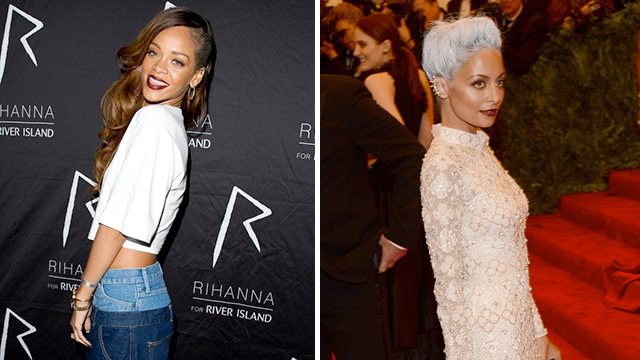 Following the 2013 Met Gala Monday night (Apr 6), Rihanna tweeted a pic of Nicole Richie with the caption: “This bitch makes me throw up.”

But RiRi’s public dig wasn’t an insult at all. The pop star actually meant that Richie’s look was “sick” and even used the hashtag #bestdressed. Despite how Rihanna may have meant it, anyone who saw Richie’s “Bride of Frankenstein” look would probably conclude that it’s pretty gag-worthy. She looks like a struggling actor who was forced to take a job at a haunted house scaring teenagers.

Rihanna must have known that the post would cause a stir, so it’s unclear why she did it. Perhaps she felt she needed even more attention.

It’s also surprising that the “Stay” singer tore herself away from her Twitter war with Chris Brown.

On Tuesday, Rihanna, who split from Brown a few weeks ago, tweeted:

Settling is not an option! Nothing less than 100% loyalty, honesty, and respect!! Love ain’t for kidz #butimsleeptho

To which Brown replied:

Sometime loving someone is too much! So loving from a distance will help everyone grow! Be blessed. Live ya life!

As Hollywood Life reported, the sultry Barbadian singer broke it off with Brown after she discovered that he had partied with his ex-girlfriend Karrueche in NYC.