GOSSIPONTHIS.COM Celebs Pregnant Halle Berry is Baby Bumping All Over The World (PHOTOS) 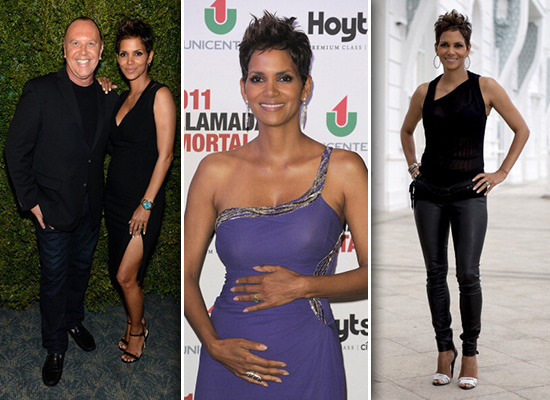 In her first appearances since confirming her second pregnancy, Halle Berry has been showing off her tiny baby bump all over the world as she promotes her new movie “The Call.”

Berry’s baby bump was virtually invisible in the black Michael Kors dress she had on when she attended a charity event to end world hunger hosted by Kors Saturday night (Apr 6) in New York City.

But it was on display for all to see Monday night (Apr 8) when she wore a figure-hugging purple Roberto Cavalli asymmetrical chiffon gown as she she posed for pictures on the red carpet of the premiere of “The Call” in Bueno Aires, Argentina.

She then flew to Rio de Janeiro, Brazil, where she was spotted today at another premiere for “The Call” wearing a cute all-black ensemble she paired with two-toned white and black heels. And it’s like her baby bump is playing peek-a-boo or something, because just like Saturday night, there is none!

Could be because she’s wearing all-black on both occasions, proving that black is indeed a slimming color … but regardless, Halle, 46, is looking flawless, as always.

“I feel fantastic. This has been the biggest surprise of my life, to tell you the truth. Thought I was kind of past the point where this could be a reality for me. So it’s been a big surprise and the most wonderful,” Halle told CNN on the red carpet Saturday at the Michael Kors charity event to help the United Nations World Food Programme fight hunger all over the world.

Halle Berry has joined Michael Kors for a philanthropic project called “Watch Hunger Stop.” According to the Associated Press, the campaign includes raising money through the sale of a version of Kors’ best-selling Runway watch. For each $295 watch that is sold, 100 meals will be provided to hungry children through the United Nations’ World Food Programme, AP reported.

Berry and Kors plan to visit locations where the meals will be sent, including Africa and Syria, and Berry has said that she would like to go while she’s pregnant, “so that I can talk about prenatal care.”

“And I will have time off,” she added. “I’m not working right now … It’s so important to me, being a mom, that I can help educate women on how important it is that when you have a healthy child, it helps set them up for life.”

While reports suggest that Berry and Martinez are expecting a baby boy, the actress was mum about that the other night. “I don’t know, I don’t know. But [the baby is] healthy!” she told CNN’s Alina Cho when she was asked about the sex of her unborn baby.

CHECK OUT MORE PHOTOS OF HALLE BERRY SHOWING OFF HER BABY BUMP ALL OVER THE WORLD BELOW: