Piers Morgan sat down for an interview with radio host Alex Jones — the man who started a petition to deport him for supporting gun control laws — on his CNN show Monday night (Jan 7), and things got pretty heated, to say the least.

To say the most, Alex Jones lost his freakin’ mind on live television, and fired off into a loud tirade against Piers Morgan, shouting to him at one point (loudly, at the top of his lungs):

“I’m here to tell you, 1776 will commence again if you try to take our firearms! It doesn’t matter how many lemmings you get out there in the street begging for them to have their guns taken. We will not relinquish them. Do you understand?”

The whole thing is pretty bizarre. Whenever Morgan would try to ask Jones, a staunch advocate for gun rights, any questions, he would just blurt out crazy stuff about 9/11, Proazac, FBI crime statistics and more. He also made it a point to tell Morgan directly, “You’re not gonna get our guns!”

At one moment in the “interview” (if you can really call it that), Jones — who hosts his own self-titled conservative radio show based out of Austin, Texas — called Morgan a “hatchet man” of the New World Order and challenged the CNN host to a boxing match.

Sadly, Morgan didn’t accept Jones’ boxing challenge, nor did he accept Jones’ courteous offer to take him out shooting at a gun range so that Morgan could “become an American” and “join the Republic.”

Last month, Alex Jones launched a petition to deport Piers Morgan, over his views on favoring stricter gun control, which he has been pushing heavily ever since the infamous Sandy Hook shooting in Newtown, Connecticut.

The petition, which has now amassed over 100,000 signatures, argues that Morgan “is engaged in a hostile attack against the US Constitution” and demands that the British citizen be sent back to his home country due to his efforts to “undermine the Bill of Rights and for exploiting his position as a national network television host to stage attacks against the rights of American citizens.”

The morning after the interview aired, as video clips of Alex Jones’ ridiculous rant made its way across the Internet, Morgan told Politico that Jones “was the best advertisement for gun control you could wish for.”

“That kind of vitriol, hatred, and zealotry is really quite scary. I didn’t feel threatened by him, but I’m concerned that someone like him has that level of influence,” Morgan said. “There’s got to be a level of discourse that can rise above what happened last night. It was undignified, unedifying.” 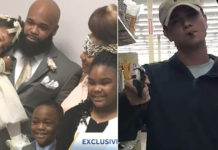