GOSSIPONTHIS.COM Celebs Angus T. Jones Is Leaving “Two and a Half Men” After This... 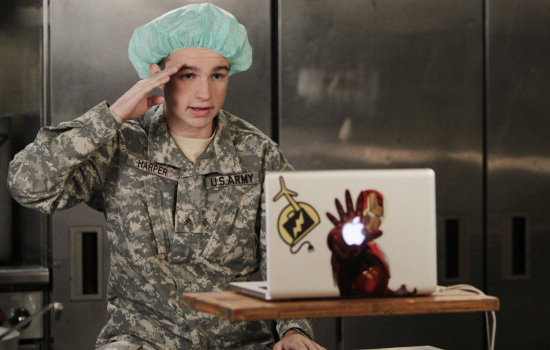 Earlier this week, actor Angus T. Jones appeared in a pair of testimonial videos for Forerunner Christian Church (also known as the “Forerunner Chronicles”) urging his fans and viewers his show “Two and a Half Men” to “please stop watching” because “it’s filling your head with filth.”

19-year-old Jones, who rakes in around $350,000 an episode on the show, also said, “You cannot be a true God-fearing person and be on a television show like that” and blamed his drug abuse and run-ins with the law (speeding tickets) on being a part of the devil’s work — aka starring on “Two and a Half Men.”

The day after the videos went viral all over the Internet, Angus (gotta love that name, lol) issued a heavily worded statement to Us Weekly where he says a whole bunch of stuff about nothing at all in particular, just thanking everyone for allowing him to waste their time over the years.

“I have been the subject of much discussion, speculation and commentary over the past 24 hours. While I cannot address everything that has been said or right every misstatement or misunderstanding, there is one thing I want to make clear.

“Without qualification, I am grateful to and have the highest regard and respect for all of the wonderful people on Two and Half Men with whom I have worked and over the past ten years who have become an extension of my family.

“Chuck Lorre, Peter Roth and many others at Warner Bros. and CBS are responsible for what has been one of the most significant experiences in my life to date. I thank them for the opportunity they have given and continue to give me and the help and guidance I have and expect to continue to receive from them.

“I also want all of the crew and cast on our show to know how much I personally care for them and appreciate their support, guidance and love over the years.

“I grew up around them and know that the time they spent with me was in many instances more than with their own families. I learned life lessons from so many of them and will never forget how much positive impact they have had on my life.”

Now, sources connected with the young TV star are telling TMZ that Angus “feels terrible” about causing such a media firestorm to surround the cast and crew of “Two and a Half Men,” is reportedly “stunned” at the public’s reaction to his videotaped testimony.

He also said he didn’t think the story would get as big as it did because he has always “felt invisible” and that “no one really cared what he thought about the show or anything else.”

According to TMZ’s sources, Angus plans on finishing out the remainder of this season to fulfill his contractual obligations on the show … but it’s “almost certain” that he will not return after the season wraps.

It’s said that Angus actually wanted to quit after last season, but decided to stay because his people convinced him that it would be “stupid” to walk out on a $15 million contract. However, someone who TRULY believed that they were doing the devil’s work would have gladly walked away from a contract, no matter how much it was worth.

At this point though, we hope he’s saved his money … because it’s gonna be pretty hard for this kid to get many acting gigs in the future since everyone thinks he’s gone all cray and what-not. Who’s next in line on the show to have a public meltdown? Is Jon Cryer gonna streak naked across the field at the Super Bowl during Beyonce’s halftime show performance or something?

Angus T. Jones Says “Two and a Half Men” Is “Filth” And You Should Stop Watching

“Two and a Half Men” Drops, But Still Continues to Shine in TV Ratings