GOSSIPONTHIS.COM Music Rihanna’s SNL Performance: Brought to You By The Salvation Army and Windows... 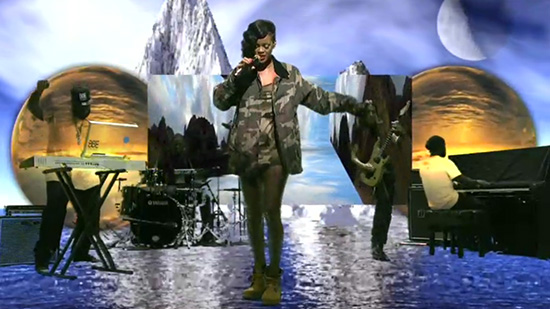 Rihanna took to the stage this weekend as the musical guest for Saturday Night Live. Unlike with past appearances, Rihanna didn’t take on any sketches.

So maybe she decided to incorporate the humor into her performance of “Diamonds.” That’s the only thing that makes sense for what ends up being a very bizarre performance in which Rihanna, wearing oversized camouflage attire that looks Salvation Army-fresh, performs in front of a disorienting backdrop that looks like a Windows 95 screensaver. She must’ve been inspired by M.I.A.‘s penchant for retro, chaotic digital art but that shit didn’t work for her and it definitely doesn’t work Rihanna. So she shouldn’t have even tried it. Her performance of “Stay,” a new ballad from her upcoming album “Unapologetic” was simple and elegant, but otherwise, largely unremarkable.