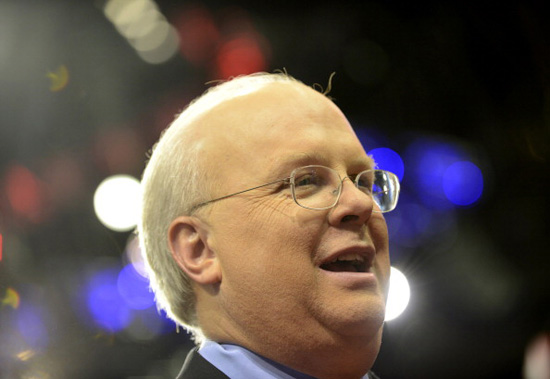 Donald Trump and Victoria Jackson weren’t the only sore losers angry over President Obama‘s win last night. Fox News contributor Karl Rove joined in on the sore loser competition by disputing his own network’s decision to call the election for President Obama after he won the key battleground state of Ohio.

Rove called Fox News’ decision “premature,” saying, “we’ve got to be careful about calling things when we have like 991 vote separating the two candidates and a quarter of the vote left to count,” and warning that Fox should be “very cautious about intruding in this process.” At that point, just to prove to Rove that the election was over, and Obama had really won, Kelly walked across the building, with cameras following her, to speak to the analysts backstage crunching numbers.

“We’re actually quite comfortable with the call in Ohio,” one of them said, while another said he was “99.9 percent” certain that President Obama had been re-elected. “There just aren’t enough Republican votes left for Mitt Romney to get there,” added another.

“Well, there you have it,” Kelly said. “They seem very confident.”

BuzzFeed called Rove’s epic meltdown “The Best TV of Election Night,” while the New York Times said Kelly’s “interrogation” of the Fox analysts was “the most bizarre on-air encounter of election night.”

However odd, the exchange perfectly captured one of the persistent sources of strain between the media and Republicans throughout the presidential campaign. Ever skeptical of a media bias toward Democrats, conservatives complained repeatedly that polls this year were showing an erroneous and biased edge for Mr. Obama.

Karl Rove may have looked like an ass … but it definitely made some damn good television! Fox News, and especially Karl Rove, don’t ever change.