The 2012 BET Hip-Hop Awards aired on TV Tuesday night (Oct 9) after being held in Atlanta earlier this month. The show, hosted by Mike Epps, featured performances from Wiz Khalifa, Young Jeezy, 2 Chainz, T.I., Future, Rick Ross and many others.

Hip-Hop legend Rakim was the recipient of the “Hip-Hop Icon” award form T.I. and Kendrick Lamar, the latter of which was honored as “Lyricist of the Year,” and also performed during the show.

Watch the performances from the 2012 BET Hip-Hop Awards here: 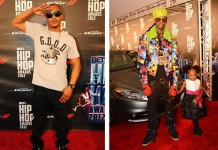