GOSSIPONTHIS.COM Celebs Gladys Knight Says Paris Jackson “Wouldn’t Have No Teeth” If She Was...
74
SHARES
ShareTweet If Gladys Knight was Paris Jackson‘s auntie … the 14-year-old would get her teeth knocked out if she mouthed off to her like she (allegedly) did to her real aunt Janet.

Gladys appeared on an episode of “The Talk” this week, and when the topic of discussion turned to the Jackson Family Drama, she especially focused on the recent Paris vs. Janet feud:

Paris is what, 14? How old is Janet? Who’s the one to try and direct the other one here? And I would think that it’s a good thing she let’s Paris know who she is.

She is a Jackson, she shouldn’t be putting the business out there like that. Cause people read into whatever they want to read into, that’s how they get the drama. So, she’s just trying to protect her in a way.

But if she called me that, she wouldn’t have no teeth. That’s the way we were brought up. You respect your elders.

Your thoughts? Do you agree with Gladys Knight? 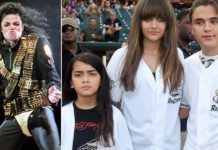