Martin Lawrence has filed for divorce from his wife of the past two years Shamicka, citing “irreconcilable differences.”

After a 15-year relationship, Martin and Shamicka got married in July 2010. They announced their separation last Tuesday (Apr 24), and the very next day, Martin filed for divorce.

Regarding their divorce, the couple released the following statement:

“Out of love and respect for one another, we will continue to remain friends and raise our two beautiful daughters together.”

Martin and Shamicka have two daughters together, 11-year-old Iyanna and 9-year-old Amara Trinity.

According to TMZ, Martin wants joint physical/legal custody of their children … and just in case you were wondering, there is a prenuptial agreement between the pair. 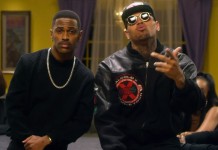