B. Scott the multimedia maven has released a brand new single “Body Rock,” produced by Fredro, who has worked with the likes of Christina Milian, Wynter Gordon and others.

This pulsating, high-energy dance record comes nearly a year after the release of his successful debut single “Kiss Kiss.”

Take a listen below! 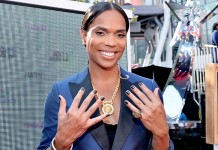 B. Scott Files $2.5 Million Lawsuit Against BET for Gender Discrimination