Following a stint in rehab last year, singer El DeBarge has once again been caught with drugs in his possession.

According to TMZ, the R&B crooner — who has dealt with substance abuse issues in the past — was arrested in L.A. yesterday for drug possession, and cops suspect he may have even been trying to sell the stuff!

El was popped around 2 PM in Encino, CA … after LAPD officers observed him participating in what appeared to be a drug deal with another man near the 101 Freeway.

He was hauled to a nearby jail where he was booked and released on $30k bail. El is due back in court next month.

Sounds like El is slowly getting back to his old ways. We hope he get his sh*t together… 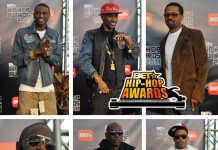