“Basketball Wives” star Kenya Bell will be a free woman soon. According to TMZ, the reality star’s husband Charlie Bell (yep, the same one she stabbed last year!) has filed for divorce.

Former NBA’er Charlie Bell filed the papers in Michigan Court — claiming there was a breakdown in the marriage (no duh).

Kenya — presumably separated from Charlie at the time — was famously arrested in May 2011, after allegedly breaking into the couple’s home and attacking Charlie with a box cutter in front of their children.

Calls to Kenya were not returned.

We’re surprised it took this long. They really should change the name of the show to “Ex-Basketball Wives” … like really, out of all the women in the show, who’s married? 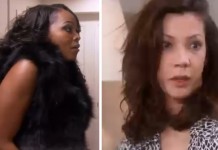