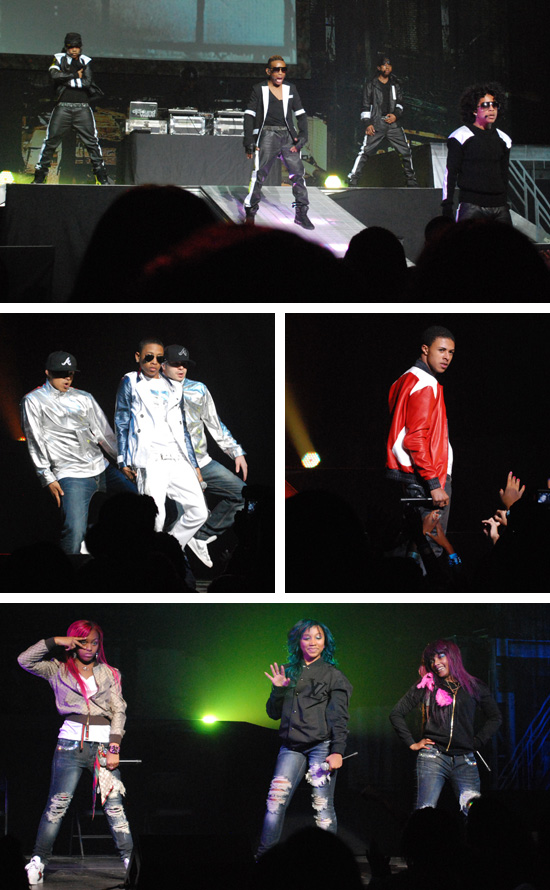 They don’t call it the “Scream Tour” for nothing.

From the time the first act hit the stage until the last act left the stage, nothing but screams filled the Fox Theater in Atlanta Sunday night (Oct 23) as the performers of “Scream Tour: The Next Generation” put on their show for the sold out crowd.

The Scream Tour helped launch the careers of acts like B2K, Bow Wow, Pretty Ricky and others … and the famous tour is back with a new lineup of upcoming R&B stars, including headliners Mindless Behavior and Diggy Simmons, and supporting acts Jacob Latimore, OMG Girlz and Hamilton Park. First up was the only girl act, the OMG Girlz, following a brief introduction from the group’s founder, Tameka “Tiny” Cottle, formerly of 90’s girl group Xscape, who told the girls (a la “Charlie’s Angels”) that their mission was to entertain the crowd.

The theme of their set was “Girls Who Run the World” and “Charlie’s Angels,” which was re-iterated by Tiny at the end when she told the girls that they had completed their mission. Running through a set list that included songs like “Gucci This,” which every little girl in the crowd sang along to, the OMG Girlz put on a really good show, which was (almost) up-staged by a surprise guest appearance from rapper T.I., who introduced his rapper son Domani, which was also met by … you guessed it … SCREAMS. Next up was ATL natives Hamilton Park, a new male R&B group spearheaded by music industry veteran Andre Harrell, and supported by Atlanta rapper/producer Jermaine Dupri. For a kids’ concert, their set almost felt out of place, with all of the sexual undertones and grinding on the microphone stand.

While we’re not really familiar with any of their music, the thousands of screaming fans in the audience clearly were. In fact, the screams were so loud, you could barely hear the music. The Boyz II men-like group was joined by Jermaine Dupri later on in their set during their performance of their latest single “Thing Called Us (Remix).” After Hamilton Park exited the stage, the next act — R&B newcomer Jacob Latimore — hit the stage and put on a great show that included lots (and lots) of dancing. Good dancing too! Kind of reminded us of a young Usher, Chris Brown and Michael Jackson, all morphed into one. As the only rapper on the roster, his set was the most unique, and he interacted with the fans a bit further than the rest of the acts by bringing up a young lady on stage to serenade her and give her flowers. After the girl left the stage, Diggy occupied the seat that was originally brought out for her, and talked with the crowd about following your dreams and trying to live up to “Great Expectations,” one of his first street singles, which he then performed.

Soon after, the rap newcomer closed out his set by performing his most recent single “Copy, Paste” from his debut album, which he rapped along to with energy that rivaled the screaming crowd of tweens. Following Diggy came the young men of the hour … Mindless Behavior! After being introduced by a short video montage, Prodigy, Princeton, Ray Ray and Roc Royal all popped out on stage, and were met with the biggest screams of the night. And you would think that since MB didn’t hit the stage until around 9:30 that their young fans would be all tired out (it was a school night, after-all). But nope! The screams just continued as the four talented boys sang and danced their fashionable little butts off to their popular tracks “#1 Girl,” “Mrs. Right” and “My Girl,” the latter of which featured a surprise guest appearance from Ciara, who guests on the remixed version of the song.

All-in-all, the Scream Tour: Next Generation concert was a spectacle, especially when you consider the fact that all of the acts — minus Hamilton Park — are all teenagers who are just now really getting the chance to perform in front of large crowds for the first time.

The kids loved it, and we even spotted some of their adult chaperones dancing and singing along too, so that’s all that matters in the end. The crowd was pleased.

Check out a ton of pictures from the Atlanta stop of the “Scream Tour: The Next Generation,” featuring OMG Girlz, Hamilton Park, Jacob Latimore, Diggy Simmons and Mindless Behavior, below: