The hilarious “electro hop” duo known as LMFAO — the son and grandson of Motown legend Berry Gordy — strip down to their speedos in their new video for “Sexy and I Know It.”

The track serves as the latest single from their second studio album “Sorry for the Party Rocking,” which also spawned the hit single “Party Rock Anthem,” which peaked at #1 on the Billboard Hot 100.

Watch the music video for “Sexy and I Know It” above (And look out for a cameo from actor Wilmer Valderrama!) 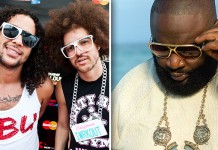 LMFAO Fires Back at Rick Ross’ Lawsuit, Calls the Rapper a “Fake Thug” 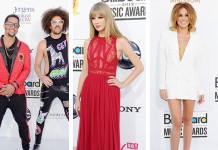