Lil B‘s “I’m Gay” album didn’t make as much noise as he intended.

The rapper’s “revolutionary” project sold a measly 1,700 units in its first week of album sales.

Just a day after its release …. Lil B put his album online for free, which probably hurt any sales he MIGHT have gotten.

Smooth move, based god! You went and called yourself gay for nothing… 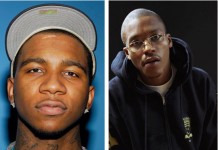 Lupe Fiasco Calls Lil B a “Genius” and a “Revolutionary”