GOSSIPONTHIS.COM Celebs “Because I Got High” Rapper Afroman Sued on 4/20 for Forgetting Concert
68
SHARES
ShareTweet Maybe he got too high … because rapper Afroman is being sued for forgetting to perform at a concert.

According to Crumpton-Law.com, Afroman, best known for his “Because I Got High” song, was sued Wednesday — which just so happened to be 4/20 aka “National Weed Day” — for failing to appear at a concert in Columbus, Ohio earlier this month.

There is some irony surrounding the date that the suit was filed as April 20th is celebrated by cannabis users as a holiday to meet and consume marijuana together. The 2002 Grammy nominated rapper’s lawyer, Matt Crompton, said of the coincidence:

The owners of The Patio — where Afroman was scheduled to perform on April 9th — are looking for a payout of an undisclosed amount for lost profits as well as a deposit paid to Afroman.

All jokes aside, this dude is an idiot. It’s not like people are going around booking “Afroman” for concerts every day. His schedule can’t be that demanding where he just “forgets” to show up at a concert. SMH… 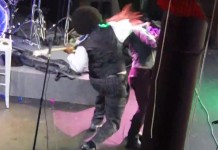