Whoever thought that two little blue endangered South American birds would rake in a staggering $40 million dollars? Well that’s just what animated 3-D film “Rio” did during its opening weekend at the box office, beating out its competition: “Scream 4.”

Among others, lending their voice-over talents to the flick were Jamie Foxx, Jesse Eisenberg, Anne Hathaway, Leslie Mann, George Lopez and Will.i.am.

After waiting 11 years with much anticipation, Scream 4 also hit the screens but didn’t fare too well. It landed at the #2 position and raked in a mediocre (by Hollywood standards) $19.2 million.

Easter movie “Hop” broke the $80 million mark by raking up another $11.1 million over the weekend. 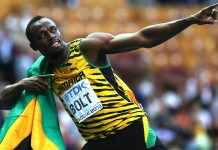 Usain Bolt Withdraws From Jamaican Olympic Trials Due to Injury