Following the biggest selling debut week of his entire career with the release of his third studio album Lasers, rapper Lupe Fiasco is featured on the cover of the forthcoming May 2011 issue of XXL Magazine.

In his feature, Lupe chats with XXL about his uphill battle with his label Atlantic Records, his gun collection (he says he owns “a ton of them”), his confidence with his skills on the mic and more. 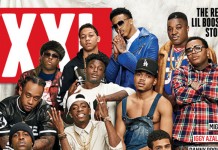