If we have to post about another damn rapper going to jail….we’re going to start our own music career!

According to XXL, Rapper Scarface has been arrested for failure to pay child support in four different cases.

A rep for the jail told XXL that ’Face is being held for incidents in Harris County, Montgomery County, Fort Lynn County and the state of Missouri. In addition he is being held for a federal case, in which the exact charges are unknown as of press time.

Facemob, who has been in custody since October 13, is being held without bail. 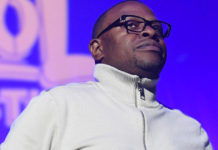