Ryan Leslie has finally been reunited with his stolen laptop….

The computer was originally stolen back in October at a German nightclub, and Leslie was offering $1 million dollars to whoever was honest enough to fork the prized machine over.

According to German website Bild.de, someone by the name of Bernd P returned the computer to the singer/producer.

So far the guy hasn’t received the million dollars Leslie said he’d pay to whoever returned the laptop.

We bet that dude has been holding on to it all this time though…..Karma is a b**ch! 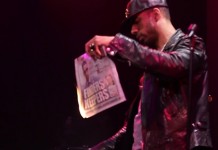 Alicia Keys and Swizz Beats Are Public Now! + Pics of Them, Melanie Fiona, Busta Rhymes and More at the Gotham Magazine Annual Gala