In a recent interview with Ozone Magazine, the self-proclaimed people’s champ explained how he was able to drop over 100 pounds through a surgery called “gastric sleeve.” Check out an excerpt from the interview below:

When did you decide to get serious about losing weight?
Honestly, when we were in Afghanistan and [reps for VH1’s] Celebrity Fit Club were contacting [me] about coming on the show. That was a hell of a wake-up call. [Being fat] isn’t a secret. You can look in the mirror and try to hide it and cover it up, and it may work here or there, but there ain’t no shirt or hat you can put on or haircut you can get to hide the fact that you’re morbidly obese. That’s what the doctor said: I was “morbidly obese.” I decided not to do [the show] but it was still a wake-up call to have people calling you saying, “Hey, you’re really, really fat.”

What kind of weight-loss surgery did you get?
The surgery I got is called gastric sleeve. There’s three kinds: gastric bypass, lap band, and the gastric sleeve. Gastric bypass is the one where you lose the most weight the quickest; it’s for people who are 400-500 pounds and have health problems that they need to fix right away. Since [the weight loss] happens so fast it leaves you with a lot of saggy skin. The lap band, which is very popular, is when they put a band around your stomach and it makes you feel like you’re full, so you don’t eat. But there’s ways to cheat with it, and with the lap band, you can always get it removed to go back to normal. [My weight] has been up and down my whole life, so I wanted to do something to permanently fix the problem. Since going back and forth on the drugs for years and taking diet pills, my metabolism was really gone. So I decided to go with the gastric sleeve, because it’s a little more serious than the lap band. They also cut out the hormones that make you hungry. So I actually don’t even get hungry anymore. The doctor talked me out of doing the lap band; he told me it’s the most popular, but it’s not as effective. With the lap band, you lose about 50% of your excess weight. I was 120 pounds overweight. I weighed 320 pounds, and I’m six feet tall. So with the lap band I still would’ve been morbidly obese. With the gastric sleeve, you typically lose 80% of your excess fat. I lost 100 pounds with it, so that’s putting me in a more healthy weight class.

Having lost 100 pounds, do you see a noticeable difference in your life?
Yeah, hands down. I feel like I got my life back. When you’re so big like that, it’s embarrassing. I didn’t want to go out and be seen. I felt uncomfortable because I’m not used to being that big. People would see me and say something about it, because it was no secret. I was morbidly obese, 120 pounds overweight. It was just embarrassing. I’d be on stage feeling like I was about to collapse. I’d get dizzy spells. I’d be on the airplane and have to ask for seatbelt extensions. Once you go up in the air, it’s really hard to breath. I was just thinking, “What if I have a heart attack?” I want to be here for my kids. I don’t want to have a heart attack. My son is four and my daughter is two and a half. The doctor told me that when you’re 50 pounds overweight, it takes 15 years off your life. So it literally saved my life.

Have you been working out too?
Nah. I’ve probably worked out twice since I had [the surgery] and that was just a light workout.

We see you Paul! 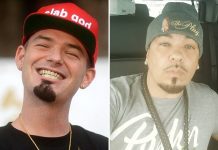