Miley‘s daddy and her older brother are teaming up for science!

Billy Ray Cyrus and his son Trace will star alongside each other in a brand new Syfy reality series that investigates UFO activity. In the series, called “UFO: Unbelievably Freakin’ Obvious,” Billy and Trace will travel across the country as they investigate the many conspiracy theories surrounding unexplained UFO activity and paranormal phenomena.

“Getting the opportunity to take this adventure with my son, who has always had a keen interest in this area, is a dream come true. I hope this series can shine a light on some of the activities we have questioned, and the mysteries that have long inspired us.”

Billy Ray Cyrus (who just turned 49 a couple weeks ago) is considered a pioneer in the country music industry and is best known for his hit single “Achy Breaky Heart.” His debut album Some Gave All, his most successful project in his entire career, remained at #1 on the Billboard 200 albums chart for 17 consecutive weeks and has been certified 9x Multi-Platinum. In late 2005, Cyrus began to co-star alongside his young daughter Miley Cyrus in the Disney Channel original series “Hannah Montana,” currently in its fourth and last season.

Trace Cyrus (21) is a musician and was the lead guitarist, songwriter and vocalist for the pop-rock band Metro Station before the group officially broke up earlier this year.

Sounds like another Cyrus family member is about to get their TV shine on! 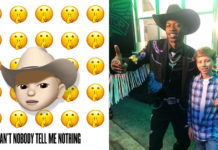