Legendary guitarist Carlos Santana, 62, proposed to his girlfriend, drummer Cindy Blackman, during a performance in Tinley Park, Ill over the weekend (Fri. Jul 9). His reps say that he popped the question after Blackman performed a drum solo four songs into the concert. And after she accepted Santana’s proposal, the happy couple was met with applause from the crowd as they shared a kiss.

Carlos and Cindy will enjoy the next month of their engagement on the U.S. leg of Santana’s “Universal Tone Tour.” He told US Magazine:

“Cindy and I are blessed to have found each other. Being in love is a gift from the universe, and the spirit and vibrations that come with it are infinitely powerful. I look forward to expressing that incredible energy through my music, and in helping to tip the balance toward more love in the world with what Cindy and I share.”

Santana divorced from his former wife of 34 years, Deborah Santana, in 2007. His new fiancee Cindy Blackman is an American jazz and rock drummer best-known for recording and touring with rock legend Lenny Kravitz. 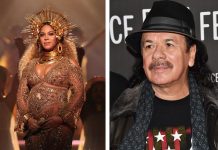