The Roots‘ drummer Questlove sat down with our friends over at VIBE.com and discussed his group’s new album How I Got Over (in stores TODAY!), among other hot topics including what he thinks about Drake, his take on whether or not The Roots’ sound can be considered Hip-Hop and more. Peep a few excerpts from the interview below:

What was the most challenging aspect when it came to recording How I Got Over?
The fact that this is the first album since Tipping Point that I had little to do with the engineering. I knew if I would have went in there with that itch that De Niro had in Heat…that just-one-more-score, I-can’t-leave-it-alone itch. If I had listened to that itch then I would have overproduced the record. To me, it was more important that people understand that the Roots is still a band. I knew that our engineer would actually present what we gave to him, which is a band type of album.

As a hip-hop fan what is your take on the hype surrounding Drake?
I’m excited about anybody really just keeping the flame of hip-hop alive. It’s really weird because Drake tells me, “Yo, when I was 12-years-old I snuck into the Opera House to see y’all.” And I remember the exact show he was talking about when Rahzel first started doing his solos. I was like Wow. Who would know that 20 years ago hip-hop’s future was in the audience watching a show that he snuck into see without paying [laughs]. And that show would have some sort of affect on his life? And I know jokingly brothers are like Drake represents the light-skin revenge movement that Al B. Sure fans have been waiting for. But I’m really excited about the kid.

Can the Roots be looked at as a hip-hop act in the era of Gucci Mane?
I know a lot of people are real confused about the evolution of the Roots. I just tell them my personal mission as one of the producers in the collective is I’m really overprotective of the perception of the group. You know that question of are we real hip-hop or not? So I was more or less obsessed with sonically trying to make sure we sounded just as aggressive as a RZA production or as a Ummah production or anybody that is basically killing the game today. As a result, I became more of an engineer than a producer.

An audio nerd, huh?
Well, to me it was more important using specific types of mics and how to make our stuff sound like it was a sample. I love that whole making people think, Ah man…y’all sampled this? Nah, motherfucker, we did this ourselves [laughs]! I played Jazzy Jeff the Joanna Newsome’s “Book of Right-On” his first question was, “Yo, how did you clear that sample???” And I was like, “No…that’s me! Don’t you hear all those drum fills?” That’s what I live for.

CHECK OUT THE ENTIRE INTERVIEW AT VIBE.COM 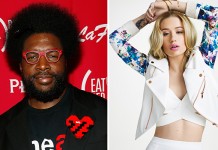