Despite getting mixed reviews, Jaden Smith and Jackie Chan‘s new movie “The Karate Kid”, which also stars actress Taraji P. Henson, came in on top of this weekend’s box office.

The movie raked in $56 million, beating out “The A-Team” which took in a disappointing $26 million) and knocking “Shrek Forever After” off its three weekend reign at No. 1. “The Karate Kid” is the biggest debut of Jaden’s career and interestingly enough, it debuted larger than all but two of his dad’s films. Continue reading for the weekend’s top 10: 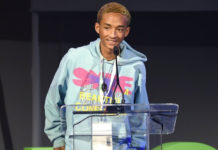