GOSSIPONTHIS.COM Hip Hop Khia Channels Her Inner Lady Gaga In Her New “Been A Bad...
ShareTweet Khia appears to be taking notes from the folks like Grace Jones, Kelis and Lady Gaga as noted by these newly released pictures of her on the set of her new music video “Been a Bad Girl.” The rapper, famous for her hit single “My Neck, My Back” (released in 2002) is preparing to release her fourth studio album Motor Mouf A.K.A. Khia Shamone sometime this Spring.

According to the homie FreddyO, Khia’s new music video was directed by Clifton Bell and was shot in Brooklyn, NYC, and reality TV personality turned singer Carmine Gotti (from the famous Gotti family) makes a cameo in the clip. Check out the pics below…

What do you think about Khia and these pics of her in her new music video? 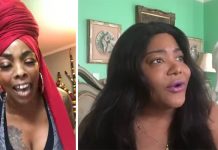 Khia’s Got Game: The Thug Misses Strikes a Pose in a University of Florida Towel

Khia Arrested for Trying to Evade the Repo Man + All 20 of Her Different Mugshots!