Let’s Talk About Pep is a real life comedy following Sandra “Pepa” Denton of Salt-n-Pepa fame as she emerges from several years of romantic and sexual dormancy, brought on by some seriously lousy relationships. Now she’s ready again to search for love and action in the capital of hooking up, New York. She’s joined by three friends also trying to negotiate the romantic minefield of NYC.

Here’s the sitch: After years of celibacy–yes, real bona fide celibacy, as in ‘the kitchen is closed’– Pep has realized that giving up sex actually got her nowhere. She didn’t “evolve,” she didn’t land a rich husband, and the only close relationship she formed was with her exercise bike. Pep is now single and determined to get back in the game–but only with the right men. And she’s turning to her support group of friends as they all try to figure out this whole sex-n-love thing.

Other folks in the building were Sandy’s other half Cheryl “Salt” Wray and rapper Ja Rule. More pics of everyone partying it up below and more info on Pepa’s girls when you continue reading… Her partners in crime, all single, are:

Kittie. She’s the wild child of the bunch. She loves a good party! Kittie has been known to look for love in all the wrong places, but she is willing and ready to find her man! Can the men of New York City handle Miss. Kittie?

Joumana. Recently divorced from NBA star Jason Kidd, this hot mama is now diving back into the scary dating pool–and prone to making the same errors in judgment (i.e., she has a weakness for bad boys) as in the past.

Jacque. TV journalist and personality. She’s the most traditional of the bunch, fairly reserved, except when it comes to what she so desperately wants: good, high-quality sperm to quell her raging baby fever.

The ladies’ home base is their weekly brunch meeting, which serves as the narrative device for scenes of their dating adventures. They all have their own unique problems and obstacles, but at least they have each other. The four friends will laugh, cry and dish the dirt as they support each other along the way

At the center of it all is Pep, trying to jumpstart a totally stalled love life. 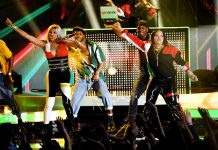