Chris Columbus and 1492 Pictures’ latest film “Percy Jackson and The Olympians – The Lightning Thief” tells the adventure of a teenager named Percy Jackson. Half man, half god, Percy discovers he is the descendant form a Greek god Poseidon and must embark on his journey to end once and for all the waging war between the gods. Starring in this epic battle are Logan Lerman (Percy Jackson), the beautiful Rosario Dawson as Persephone, Uma Thurman as Medusa, Sean Bean as Zeus and James Bond himself, Pierce Brosnan as Chrion.

Percy Jackson & the Olympians: The Lightning Thief hits theaters February 12, 2010. Be sure to check it out.

END_OF_DOCUMENT_TOKEN_TO_BE_REPLACED 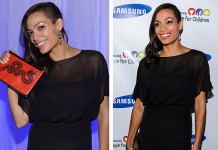