Nivea and her pregnant belly were front and center Sunday night (Aug 30) as she held an A&R showcase and launch party for her new management/artist development company Avalon Music Group at ICE Ultra lounge in Atlanta. Producer Jazze Pha was also there to support his homegirl.

According to FreddyO, that rock on Nivea’s finger is an engagement ring that came from her babydaddy Lil Wayne. She’s also going to start laying down tracks for a new album pretty soon. 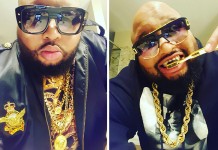