Studdard’s first CD, “Soulful,” was a big hit in 2003, going platinum. And his second album, “I Need an Angel,” a gospel album, also sold well, despite being aimed at a specialty audience. But the poor sales for his 2006 CD, “The Return,” apparently prompted the label to let him go. That CD sold less than 250,000 copies.

Studdard, meanwhile, has turned his attention to the stage. He is reportedly preparing to star in a road-show version of the Broadway hit “Ain’t Misbehavin’,” playing the lead character, jazz great Fats Waller. So all is not lost I suppose. 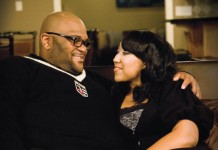