Janet Jackson Â» “Feedback” Â» LISTEN Â» (Full) Â» I’m sure you all remember me posting about Janet Jackson’s forthcoming single not too long ago (in April). Here is her brand new song “Feedback,” produced by Rodney ‘Darkchild’ Jerkins, it will be the first single lifted from Janet Jackson’s 10th studio album, appropriately entitled, Discipline (Island Def Jam). The singer’s new LP is due out February 26th of next year.

Timbaland ft. Keri Hilson + Nicole Scherzinger Â» “Scream” Â» LISTEN Â» (Full) Â» “Scream” is set to be the forth single lifted from Timbaland’s Shock Value (Interscope). The heavy string/tambourine sounding single features co-production by Danja and a guest appearance by Keri Hilson and light background vocals from Nicole Scherzinger. I really wasn’t all into this song that much at first but it’s getting there!

Fergie ft. Soulja Boy Â» “Clumsy (Collipark Remix)” Â» LISTEN Â» (Full) Â» Yelp, you read right. Collipark decided to make a remix to Fergie’s song “Clumsy” and decided to throw Soulja Boy in the mix! I like the original of “Clumsy” so much that any remix wouldn’t do me, not even Soulja Boy swayed me, sorry.

Chingy ft. Ludacris + Bobby Valentino Â» “Gimme Dat (Explicit)” Â» LISTEN Â» (Full) Â» “Gimme Dat” is slated to be Chingy’s second single from his forth studio album Hate It Or Love It (Def Jam/DTP). The single features stellar production by Full Scale and guest appearances by Ludacris and Bobby Valentino (vocals). The bass did it for me, this is my cut! Very nice single choice. Hmm, I wonder if Chingy reads blogs becos he has definitely stepped his game up this time around I’d say! 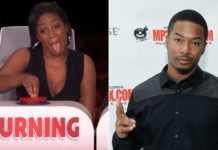