Lupe Fiasco returns with his sophomore effort Lupe Fiasco’s The Cool (1st & 15th, Atlantic) which hits stores December 18th, included with Fiasco’s new LP is the first single lifted “Super Star” featuring Matthew Santos and street single “Dumb It Down (which was made into a “virtual buzz” video on Youtube). Now you know I couldn’t wait for this album, ever since Food & Liquor I was hooked! I swear this man is underrated due to lackadaisical promo, every time I would listen to that album and say who’s it by people would be like, “who’s that?” Then I let them HOLD the album and they do not return it. I’m so serious, Fiasco is … the truth! His metaphors and approach are just so stellar and inspirational at the same time! Same case with his latest album, The Cool. I think it’s fairly up to par with F&L. My favourite tracks are “Gold Watch,” “Little Weapon,” “Superstar,” “Go Go Gadget Flow” and “The Coolest.”

// CLICK HERE TO LISTEN TO LUPE FIASCO’S THE COOL ON MTV’S THE LEAK BEFORE IT HITS STORES DEC. 18TH! // 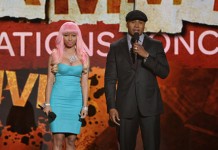