Venus, is that you? Lol. The United Nations Educational, Scientific and Cultural Organization (UNESCO), and the Sony Ericsson WTA Tour, the worldâ€™s leading global sport for women, announced today the selection and funding of womenâ€™s leadership programs in Cameroon, Liberia, China, Jordan and the Dominican Republic, along with a new global advertising campaign designed to raise awareness and promote the goal of gender equality. Venus Williams (pictured above) is a part of the advertising campaign, elevision spots as well as a print ad, is expected to be run by a number of international and national broadcasters, including Eurosport, Zee Sports in India, NTV in Russia and the Tennis Channel in the USA. The ads are designed to raise awareness and promote the goal of gender equality and womenâ€™s leadership. They are also designed to introduce the Tourâ€™s rising star players as global role models for womenâ€™s leadership in their role as Promoters of Gender Equality. The television spots and print advertisements can be viewed on the Tourâ€™s official website.

In addition, Venus Williamsâ€™ clothing line, “Eleven,” and her retail partner Steve & Barryâ€™s, announced today that they have created a special Venus Williams/UNESCO tee shirt that will be sold at Steve & Barryâ€™s retail outlets, online at the Tourâ€™s official website and at select Tour tournaments, with the net proceeds from sales to be donated to the UNESCO-Sony Ericsson WTA Tour partnership.

Is it just me, or does homegirl look like a straight up dude? I really hope this get-up was just for this event Lol, since it is about gender equality and what-not… 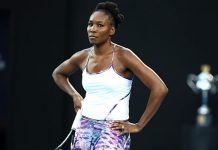 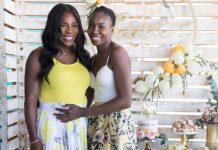 Serena Williams Clarifies Sister’s Slip of the Tongue, Says She Doesn’t Know the Sex of Her Baby