Apparently dudes from the street are really starting to turn sweet. Trinidad James caused an uproar recently when he stopped to pose for a pic with Bad Girls Club stars wearing a jean skirt. Bitch, don’t kill his vibe.

If we have to pin a source on this whole rappers wearing skirts thing, we have to look at Kanye. But ‘Ye kept his “skirt” more along the lines of a kilt. Which, you know, is actually worn by Scottish men, so it’s a little more passable. Plus, it was black and leather.

But Trinidad James is out here in a jean skirt from the juniors section with freshly shaven legs. What part of the game is that?

Here’s the shot with Stephanie Rivera from Bad Girls Club 11 which she posted on Instagram: Apparently, this wasn’t even the first time Trinidad turned out and showed out with a skirt. Back in June, he made a radio station appearance in a skirt with some flower-patterned leggings. So far, Trinidad hasn’t put out an official statement about his skirt-wearing ways, but he did send out this tweet.

Ok. If by different he means wearing skirts, then he’s one among a million. He can cross his legs and have a seat next to A$AP Rocky, Derek J and Miss Lawrence. 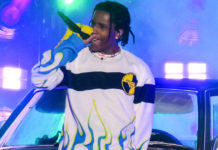