A 14-year-old student was shot in the head at Price Middle School in Atlanta, Georgia Thursday afternoon (Jan 31), according to multiple confirmed reports from the area. The student was immediately rushed to Grady Memorial Hospital, who confirmed that they were treating an under-aged gunshot victim.

Preliminary reports stated that the student who was shot was a girl, however hospital officials are saying that the shooting victim was a boy. Also injured during the melee was a teacher, who may have been trampled amid the confusion following the shooting.

According to an official for Atlanta Public Schools, the student was specifically shot in the back of the neck, and was awake and responsive when he was transported to the hospital.

Fortunately, the shooting victim’s injuries are not life-threatening, and a suspect — confirmed by school officials to be a fellow student — is in police custody.

Police spokesman Carlos Campos said the shooting followed a fight that occurred outside the building on school grounds, and no other students were injured.

UPDATE #1: The student who was shot was identified as 8th grader Telvis Douglas and his injuries are non-life threatening. He was released from the hospital late Thursday evening.

UPDATE #2: According to Atlanta police chief George Turner, an off-duty police officer working at the school as a resource officer quickly disarmed and apprehended the shooter immediately after the first and only shot was fired. Price Middle School has 400 students and has metal detectors installed at the doors, according to school district Superintendent Erroll Davis. He said the district will investigate how a student was able to bring the gun into the school in the first place. 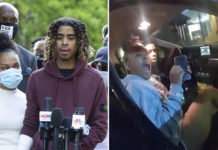