We love how the performance started out just like the music video! Truth be told, we have no idea what she’s saying (who really listens to the words anyway? LOL) but that doesn’t take away from the energy of the overall performance one bit. The ending was dope too, when she put the mic down and did the choreography with the drummers.

Shakira’s new album She Wolf will be released here in the U.S. on November 23rd. Continue reading for the video of her performance. 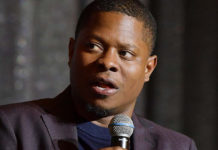