Apple debuted a new iPod / iTunes ad a few nights ago on television. The ad continues the silhouette dancer theme of Apple’s long running iPod ads and features Mary J. Blige singing “Work That” (her next single) from her new album Growing Pains, which is slated for a December 18th release. Peep the ad above. I think it’s definitely a good look for apple to start using R&B/Hip-Hop artists in their television ads! 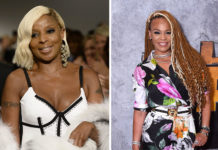 No, Faith Evans & Mary J. Blige Did NOT Fight at a Party Hosted by Diddy in the Hamptons