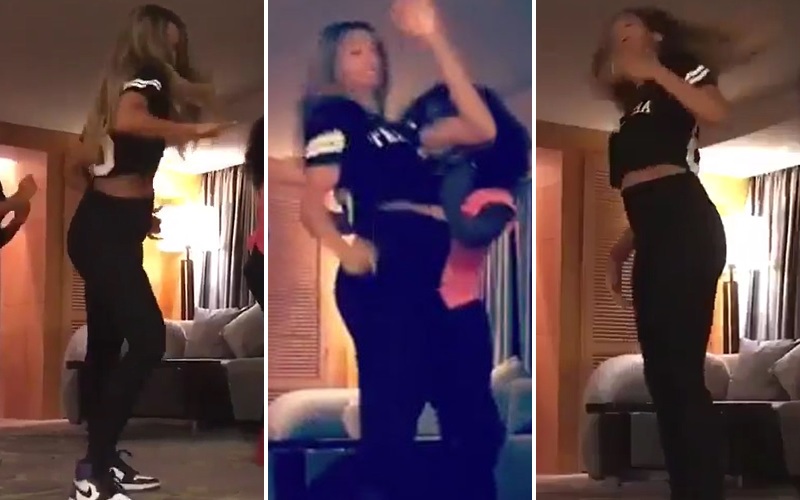 Ciara and Russell Wilson are playing no games and checking off life’s major moments like it’s nothing. Beautiful engagement, fairytale wedding, waiting to have sex until their honeymoon, and now, a baby! That last one is unconfirmed, but many Ciara fans are seriously speculating that the singer is pregnant.

While preparing to be a judge for the 2016 Miss America Pageant, Ciara posted a video of herself dancing with past Miss Americas. While there is a visibly pregnant woman in the video (yellow shirt), Ciara may have also been sporting a small baby bump of her own.

She’s noticeably covering up those famous abs of hers with a high-waisted pant. When she turns to the side or does a body roll her stomach is not as flat as we’re used to seeing.

The R&B singer’s dress for the evening also aided in the baby rumor being thrust into overdrive. Ciara never fails to show off her toned body with a sheer down or suggestive cut-outs. However, for the Miss America pageant, she opted for a conservative gown featuring a large peplum around her waist that covers her tummy area. Russell Wilson has also posted a few cryptic joyous tweets in the past few weeks. Coupled with the Ciara video and we might be onto something.

However, even if it Ciara and Russell are expecting their first child together, it would be highly unlikely for a baby bump to be so noticeable since they just consummated their relationship just two months ago. (Or maybe that’s just what they want us to think!)

It was also recently reported the couple had decided to hold off on children in order to focus on their individual careers. Wilson even said he was enjoying just being a great stepfather to Ciara’s son with rapper, Future.

They obviously won’t be to keep their little secret for long. Until we know for sure, I’m still giving my congratulations to the couple a little early!