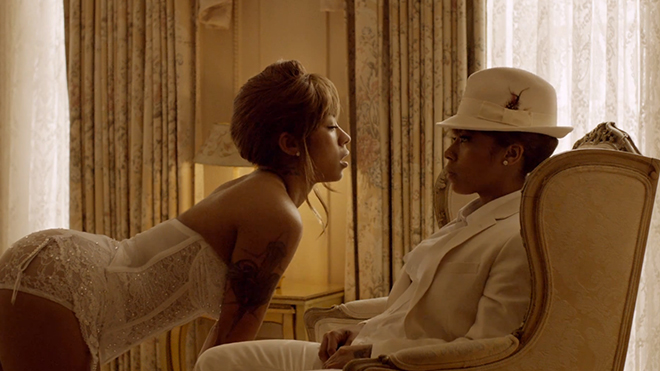 Just like the song suggests, Keyshia Cole proves that she is down to try something different in the provocative music video for her new single “She.”

Keyshia made headlines last month when she released the song insinuating that she was singing about her lesbian lover just days after it was reported that she would soon be filing for divorce from her ex NBA player husband Daniel “Boobie” Gibson.

In her new video for the sensual track, the newly-single singer rolls around the bed in sexy lingerie in an attempt to seduce a “mysterious woman” who looks very familiar.

Regarding the song’s concept, Keyshia says it’s not about her playing for the other team. “It’s about self love to me, and going through my divorce, you have to give yourself a little self love because you’re used to somebody being there every night and they’re not,” the R&B singer said on BET’s 106 & Park.

“She” is the first single from Keyshia Cole’s sixth studio album Point of No Return (release date TBA), which will feature guest appearances from Future, 2 Chainz, Wale and August Alsina.

Watch Keyshia Cole’s video for “She” above!