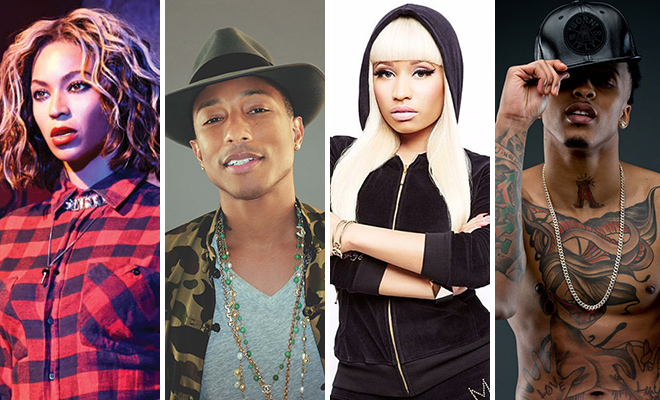 Queen B — who closed the show with her husband Jay Z in a pre-taped performance from their “On The Run Tour” — took home the most awards, winning three trophies, for “Best Female R&B/Pop Artist,” “Best Collaboration,” and the “Fandemonium Award.”

Continuing his epic year, Pharrell — who opened the show with a surprise appearance from Missy Elliott — scored two wins, one for “Video of the Year” and the other in the “Best Male R&B/Pop Artist” category.

Before sharing the stage with Trey Songz and Chris Brown, R&B newcomer August Alsina won the first award of the night (“Best New Artist”) and gave an emotional acceptance speech. He also won the “Viewers’ Choice” award later in the night.

As for Nicki Minaj, the current Queen of Hip Hop (unsurprisingly) won the “Best Female Hip Hop Artist” for the fifth year in a row and shared the award for “Best Group” with her YMCMB family.

“I thank God that I’ve been placed in a position to represent women in a culture that is so male driven,” she said in her acceptance speech for her award.

See the full list of winners (via Rap-Up.com) below: