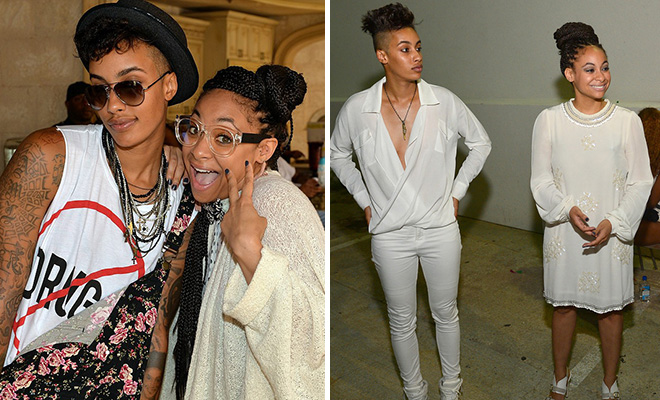 Raven-Symoné and her rumored girlfriend — former America’s Next top Model contestant AzMarie Livingston — stepped out together for the first time publicly this weekend, as they attended Ludacris‘ 8th Annual Luda Day Weekend festivities in Atlanta.

The purported couple, who have allegedly been dating for years, were spotted at Luda’s Labor Day charity event (the Luda Day Weekend Celebrity Pool Party), as well as the rapper’s all-white party the Saturday prior.

At the end of her fun-filled weekend, Raven, who clearly enjoyed herself, tweeted:

#Ludadayweekend #bestdaysever I don't know the words to describe my weekend… I MADE IT THRU! For the kids! @everyonewhoturnedup yesssss..

It was just a few weeks ago that the former Disney Channel star had people talking after she tweeted that she could “finally get married” when the Supreme Court struck down California’s Defense of Marriage Act, which led many people to believe that she was (1) coming out of the closet and (2) getting hitched to her partner.

However, she later clarified her tweet in a statement, saying that although she’s happy that more states are legalizing same-sex marriages she had no plans of getting married anytime soon.

“I am very happy that gay marriage is opening up around the country and is being accepted,” she explained. “I was excited to hear today that more states legalized gay marriage. I, however am not currently getting married, but it is great to know I can now, should I wish to.”

Without neither confirming nor denying her sexuality, Raven was also forced to respond to a National Enquirer report last year that attempted to yank her out of the closet against her will.

At the time, she tweeted:

I’m living my PERSONAL life the way I’m happiest. I’m not one, in my 25 year career to disclose who I’m dating, and I shall not start now.

My sexual orientation is mine, and the person I’m datings to know. I’m not one for a public display of my life.

However that is my right as a HUMAN Being whether straight or gay. To tell or not to tell. As long as I’m not harming anyone. I am a light being made from love. And my career is the only thing I would like to put on display, not my personal life. Kisses!

CHECK OUT THE PHOTOS OF RAVEN-SYMONÉ AND HER (RUMORED) GIRLFRIEND AZMARIE LIVINGSTON DURING LUDA DAY WEEKEND IN ATLANTA HERE: